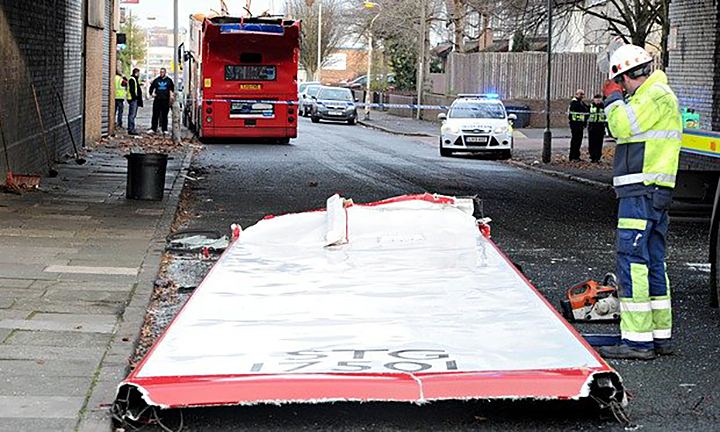 Analogue audio signals (mainly from vinyl these days) are not constrained like digital audio signals, so they need headroom to expand into.

Now think of the road underneath the bridge being bumpy... bridge strike!

That's what you'll get if you don't allow sufficient headroom with an analogue signal. What? Bridge strike? No, clipping!

A preamplifier stage or line amplifier is a small signal amplifier, and the maximum signal swing - the positive peak to the negative peak - is dictated by the amplifier's DC power supply voltage.

The digital signal is the maximum rms voltage constrained by 0dBfs - zero decibels full scale - it can only go lower, not higher.

However, an analogue signal of 2.8 volts rms reference 0dB can go higher. The output from a vinyl record can exceed its 0dB reference by as much as +14dB - five times bigger - between 800Hz and 2500Hz.

Amplifying devices (except for rail to rail op-amps) won't swing all the way to the power rails so we need to allow 10 - 20% more voltage: resulting between 44 and 48 volts. With that amount of headroom the signal cannot clip.

Therefore as a rule of thumb an analogue stage needs a DC supply voltage at least 16 times the rated rms signal. However, a digital signal needs only around 4 times its voltage.

Let's now take a look at a phono stage. I often use an 18 volt DC supply internally regulated from an external 24 volt supply. The phono stage signal is analogue so using the rule of thumb, 18/16 = 1.125 volts - that's the maximum rms voltage at the output which allows for sufficient headroom.

If the phono stage gain were to be 112.5, the input signal for the 1.125 volt output will be 10mV, and therefore I will recommend a maximum cartridge output of 10mV for that particular phono stage. This gives sufficient headroom such that the signal will never clip with a vinyl LP.

Most preamp or integrated amplifier inputs are rated at around 300mV to give full output. The volume control makes up for any signal above 300mV as well as setting the volume level.

However, going on the number of emails I receive from valve amplifier owners, even twice that input is insufficient to drive a 300mV input. Obviously there's a fault with the amplifier.

Rather than rectify the fault, the customer often asks me if I can up the gain of a phono stage to output the same as a 2.8 volt rms CD player. The savvy reader having read the story so far, will understand why I say no. The reason being there won't be sufficient headroom in the phono stage before clipping.

Even after explaining this the customer will invariably go out and get an adjustable phono stage which uses a similar supply voltage, and switch-in higher gain to up the output.

What happens? Clipping is what happens! So not only do they waste a good phono stage, they suffer blown tweeters sooner than getting the valve amplifier rectified.

The problem is the lack of education. It's a digital world today where headroom isn't a factor - but in analogue headroom is of extreme importance.

I hope this blog post will have educated some about the need for headroom.

Comments will appear on this page after moderation.

The hi-fi industry was (and still is) unprepared for cellphone interference when it comes to the high gain circuits essential to phono preamplification for moving coil cartridges. The problem is that . . .